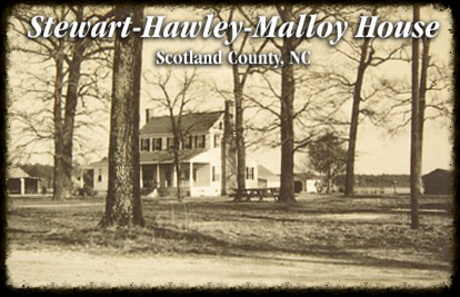 This two-story farmhouse was built in the 1790s, is listed on the National Register, is a marked stop on the North Carolina Civil War Trail (Stewart-Hawley-Malloy marker) and is featured in the book A Guide to the Historic Architecture of Eastern North Carolina. It is the oldest house in Scotland County, North Carolina, and among the oldest in the state. It is historically significant, having been built by James Stewart, who was born in Scotland in 1775, moved to America and served as a Federalist in the 15th Congress of the young United States. This home was also the birthplace of William Hawley who would become a Union general. During the Civil War, the home belonged to Dr. John Malloy, a physician who, according to his great granddaughter, used the home as a hospital during the Civil War.

The home's 3,200 square-feet are divided into about 10 different spaces, including a wide central passage that runs through the center of the house.  Between 2001 and 2015 we renovated the home, installing all new plumbing, including a Rennai tankless water heater; all new wiring, all new heating and ventilation, new windows with exterior storm windows, a new roof, and a new kitchen with new, stainless steel appliances.

Because the house is on the National Register of Historic Places, we chose to be careful about our renovation.  For example, we completely rebuilt 40 of the original 60 window sashes, salvaging and reusing the original wavy glass when possible.  The 20 sashes that we replaced we had custom-made of wood and glass; they are identical to the existing windows. We reused materials whenever possible, salvaging the usable boards from the front porch and using them as flooring in the north passage. The north passage is a particularly interesting space:  On the walls are tongue-in-groove boards from four centuries.  The first set is from the original building, in the late 1700s, the second from a renovation that took place in 1850, a third set from the 1970s, and the ones we installed in 2005.

The walls in the original part of the house are hand-planed wood planks, with original ornate dentil molding and wainscoting.  We could have covered the paneling in sheetrock, but elected to keep the rustic look of the wood walls. The floors are also original. We sanded them only lightly; they are authentically distressed. We replaced the kitchen floor because it needed to be re-engineered. There are four fireplaces: one in the parlor, one in the library, and one in each of the upstairs bedrooms. Most of the doors in the house are original.  Some of the original doorknobs, hinges, and hardware remain. The shutters on the first floor of the house in the front (about eight pairs) are original with original hinges, closures, and shutter dogs.

The home sits toward the front of a five-acre piece of partially wooded land and is directly adjacent to wetlands and a slow branch of Leith Creek. It is rural; the closest neighbor is several hundred yards away and cannot be seen when the trees are in leaf. Directly across the road is the pasture of a 15-acre horse farm.